Understanding population distribution along coastal areas in the Pacific is crucial for a range of applications including food security and disaster management. A collaborative project between SPC, WorldFish and the University of Wollongong has produced the first detailed population estimates of people living close to the coast in the 22 Pacific Island Countries and Territories (PICTs). These estimates are stratified into 1, 5, and 10km zones.

In the study, we use a combination of national census data and two dasymetric mapping systems: the public domain SEDAC-CIESIN GPWv4 data set and proprietary LandScan maps. National census data vary in detail among PICTs: the 2016 national census in Tonga gathered georeferenced household data, but the vast majority of PICTs have older, less reliable and precise information. Our analysis explores differences in population estimates using census data and global models, and develops a decision tree to guide future analyses based on the availability and method of national surveys. Workflow representing the methodology followed to classify and analyse the datasets utilised in the study. 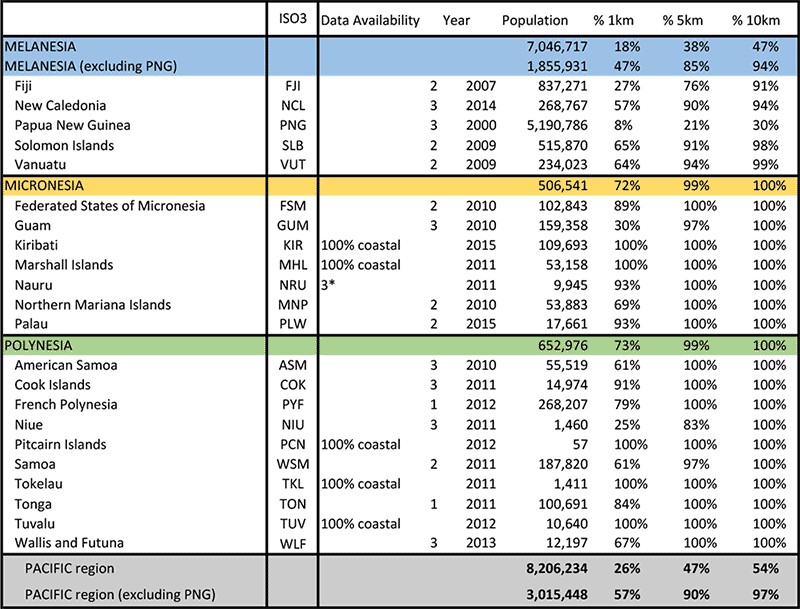 All of the population in the coral atoll nations of Tokelau and Tuvalu live within a 1 km of the ocean. Results using the two global dasymetric datasets, SEDAC-CIESIN Gridded Population of the World v4 (GPWv4) and Landscan differed: Landscan under-dispersed population, overestimating numbers in urban centres and underestimating population in rural areas and GPWv4 over-dispersed the population. In addition to errors introduced by the allocation models of the dasymetric methods, errors were introduced as artefacts of allocating households to 1 km x 1 km grid cell data (30 arc–seconds) to polygons. The limited utility of LandScan and GPWv4 in advancing this analysis may be overcome with more spatially resolved census data and the inclusion of elevation above sea level as an important dimension of vulnerability. Comparison of methods for disaggregating populations to enumeration areas and buffer zones.

The image below shows this StoryMap which has been setup to visualise the results. A methodology paper titled "Coastal proximity of populations in 22 Pacific Island Countries and Territories" was published in September 2019.

All datasets used to calculate the coastal populations, and which can be freely published, are provided below:

Note: there are no links for for Pitcairn, Tuvalu and Tokelau because no analysis was carried out (they are 100% coastal). Kiribati and RMI are also are 100 % coastal but we conducted some analysis to make sure this was the case.