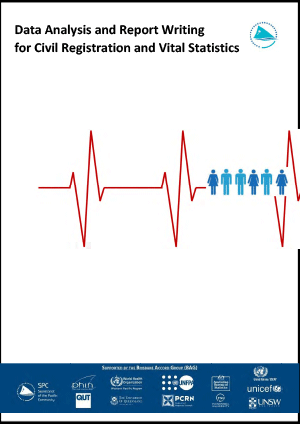 Over the last 2 weeks of September, 18 participants from six countries (Kiribati, Tuvalu, Samoa, Papua New Guinea, Vanuatu and Solomon Islands) participated in a data analysis and report writing workshop in Noumea. The workshop organized by the Brisbane Accord Group (BAG) and led by the Pacific Community (SPC) with assistance from ESCAP and Australian Bureau of Statistics (ABS) also included a representative from the data use stream of the Data4Health project managed by Vital Strategies, who are also working with the Solomon Islands and PNG on their CRVS data.

The purpose of the workshop was to build the capacity of countries in the analysis and publication of vital statistics and improve the availability of these statistics; with a primary focus on civil registration based vital statistics. The course was structured to support national teams to analyze their own data to generate a draft national analysis report and indicators in line with international reporting commitments. This workshop was conducted in alignment with the 2016 priorities of the Pacific Vital statistics Action Plan (PVSAP) and the Ten Year Pacific Statistics Strategy (TYPSS), both of which place emphasis on the need to: strengthen data analytical skills among data producers, and make better use of institution-based data. It was also designed to respond to priorities identified by member countries in national CRVS plans and raised at regional forums such as the Pacific Ministers of Health meeting.

This was third data analysis and report writing workshop conducted by BAG in the years (2014–2016), with all countries now having been offered at least one round of training. Participants were drawn from civil registration offices, the ministries of health and national statistics offices, with the emphasis on examining national datasets as a combined team.

The course was based upon material from a range of sources, in particular tools and materials developed by SPC, the World Health Organization (WHO), the University of Queensland, the University of New South Wales, ABS, the United States Census Bureau, and Open courseware from John Hopkins University. The training covered topics including data sources, data cleaning and tabulation, coverage and completeness, births and fertility analysis, deaths and summary measures of mortality, cause of death patterns, and writing skills for reports.

All countries were able to produce a first draft of their vital statistics reports by the end of the training and we are looking forward to these being available over the next few months. BAG partners will continue to support participants and their national CRVS committees as they complete and ready their reports for publication.

Get the Data Analysis and Report Writing for CRVS.