Between 29 May and 1 June 2017, statisticians from Pacific Island countries and territories came together in Noumea, New Caledonia for a workshop on updating the weight reference period of the consumer price index (CPI). The workshop was organised by the Pacific Community (SPC) and the Australian Bureau of Statistics (ABS), and aimed at training price index compilers on the use of data from expenditure surveys and other sources to rebase their CPI. 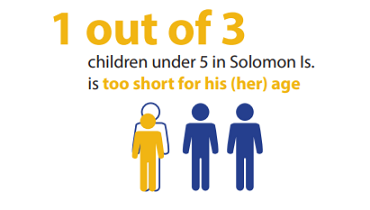 Poor nutritional intake by children resulting in stunting remains one of the top development challenges in the country. This was revealed during the double launching of the Solomon Islands national statistics development strategy (NSDS) report and the 2015 Demographic and Health Survey (DHS) report in Honiara, where it was revealed that poor child nutrition resulting in stunting was alarmingly high in the country.

The Vanuatu National Statistics Office (VNSO) has released a series of short films comprising of stories with information from thematic areas collected during the Demographic Health Survey (DHS) conducted in 2013. The thematic areas include reproductive health, fertility and family planning, child health, nutrition, HIV and Aids and Malaria.