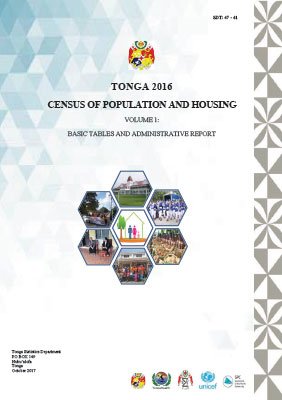 This report is the 8th population census report of the kingdom since 1956, and the 6th census conducted by the Statistics Department. It provides administrative information and basic statistical tabulation of the 2016 Population and Housing Census of Tonga. The census date was midnight, the 30th of November 2016. Information incorporated in this report will facilitate the decision makers in Tonga with respect to the current and future socio-economic conditions in the Kingdom.

The substantive information of this report is presented in three parts. Part 1 presents the statistical tables (General Tables and Household Tables) itemizing the data provided in the Analytical report. Part 2 provides the background information on Census 2016. Part 3 contains the Appendices which include: the Questionnaire Forms.