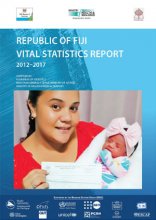 Fiji’s vital statistics report provides statistics pertaining to live births registered by the Civil Registration Office of Fiji during period 2012–2017, and deaths recorded by the Ministry of Health and Medical Services (MoHMS) during years 2015–2017. The civil registration office recorded 88.5% and 93% of births and deaths that occurred in Fiji within this period respectively.

The crude birth rate for the period 2015–2017 is 22.8 per 1,000 population. Life expectancy at birth for both sexes is estimated at 67 years; 69 years for females and 65 years for males. Total Fertility Rate (TFR) is at 2.9. Circulatory diseases, diabetes and cancers were the leading causes of death in Fiji over the three-year period for both males and females (all ages combined).

Work for this project was supported by the Brisbane Accord Group of agencies under the leadership of the Pacific Community (SPC), Australian Bureau of Statistics (ABS), United Nations Children’s Fund (UNICEF), United Nations Economic and Social Commission for Asia and the Pacific (UNESCAP) and the World Health Organisation (WHO). The support from UNESCAP was made as part of the a project to strengthen National Capacity in Producing and Disseminating Vital Statistics, funded by the Bloomberg Philanthropies Data for Health Initiative.