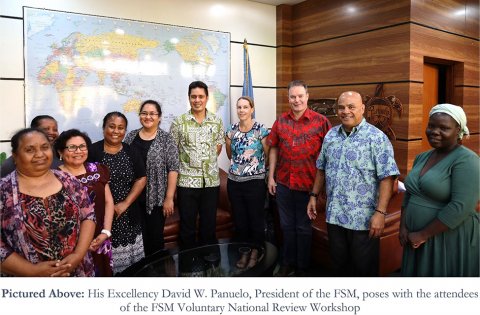 'On December 5th, 2019, His Excellency David W. Panuelo, President of the Federated States of Micronesia (FSM), received attendees of the FSM Voluntary National Review Workshop, a collaborative exploration on how the FSM is progressing on the Sustainable Development Goals (SDGs) in the context of its own national development, in a courtesy call. The purpose of the meeting was to update the President on the outcomes of the Workshop, held between December 2nd to December 5th, and to hear his views on the next steps.

The SDGs derive from the United Nations General Assembly as part of UN Resolution 70-1, which describes the 2030 Agenda—i.e., what the global community of nations around the world wish to see addressed by 2030.

The FSM National Government is intending to host another workshop on the Voluntary National Review in February 2020, and humbly requests representatives of all State Governments, Non-Government Organizations, and interested members of the private sector and civil society to attend.'

Read the full story, on the FSM National Government website's.