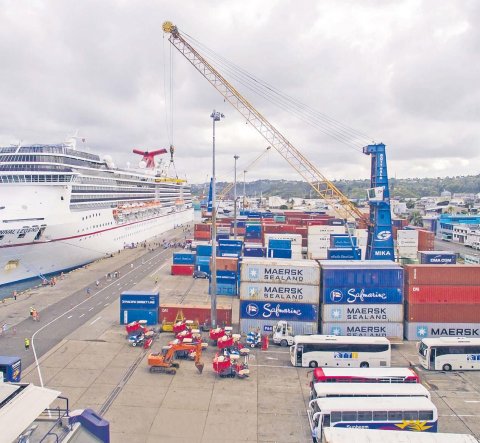 2020 will be remembered as the year the world experienced COVID-19, the first global pandemic of the modern era. The Pacific has not been spared, and although the number of cases has not reached certain levels known elsewhere in the world, many economic sectors of Pacific Island Countries have been deeply affected by the crisis.

This is the case of International Merchandise Trade, for which statistics covering the first 6 months of the year 2020 in Fiji, Samoa, Tonga and Tuvalu have become available. All four countries report declines in their trade in this period compared to the same period of 2019. Exports (including re-exports) declined in all four countries and imports declined in three.

Trade is expected to continue to be disrupted in the coming quarters as the economic impacts continue to accumulate across the Pacific region. Further declines in both imports and exports cannot be ruled out due to the COVID-19 crisis becoming protracted in trading partner countries.

Trade flows have been particularly impacted by the grounding of the aviation sector across the whole Pacific region. This has been one of the primary factors leading to the decline in imports and the subsequent re-export of mineral fuels for all four countries. Although data is not yet available, it is very likely that a similar pattern will be seen in other countries who rely on the aviation sector for trade, as well as tourism.

Across the region the production and export of fish has also been disrupted by the border closures and general lockdowns and this has contributed to the overall decline in exports in Fiji, Samoa and Tonga. Data in the coming quarters will shed more light on the performance of fish trade which is also dependant on the demand at the source markets. Border closures and the loss of tourism related revenues will continue to depress domestic expenditure and the demand for imports of consumer goods as unemployment increases and family incomes decrease.

Many Pacific countries rely on trade and/or consumption taxes for a significant proportion of national government revenues.  Weaknesses in trade flows, both exports for foreign exchange earnings and imports for tax revenues will have serious implications for public finances and the ability of governments to maintain public services.