Starting from the first quarter of 2018, the Palau Bureau of Budget and Planning has switched to calculating and publishing its quarterly Consumer Price Index (CPI) series based on an updated set of weights and basket of representative goods and services. The Bureau has also adopted the international COICOP classification as its publication schema. The new CPI series with its base of September 2016 replaces the old series which had a base period of June 2008 = 100.

SPC was able to contribute to this important milestone through targeted technical assistance.

Visit the BBP website for the latest Palau CPI publications.

The weights for the new series are largely derived from the most recent Household Income and Expenditure Survey (HIES) and reflect the Palau consumer expenditure pattern in 2014. This is a significant update from the old series, for which the weights were based on expenditure estimates from the 2006 HIES. The graph below compares the new and old weights at the COICOP division level.

The new CPI series, and the basket of items on which it is based, include some additional products that were previously not included in the basket. In particular, the number of prices collected for food items and alcoholic beverages has been expanded to better capture average price changes in these categories. In addition, the basket for Communications has been updated to better capture and improve the measurement of prices of mobile phone and internet services, which represent an ever-increasing share of consumer expenditures in Palau, as well as other Pacific Islands. On the other hand, out of pocket expenditure by households on healthcare has declined significantly since the introduction of the Healthcare Fund incorporating the statutory medical savings accounts and national health insurance in 2010. As a result of this the weight for healthcare in the CPI has been reduced.

Finally, the new CPI series adopts the international COICOP classification as its publication schema. This means that inflation in Palau, overall and for product categories, can now be compared directly to the inflation in a majority of countries around the world. 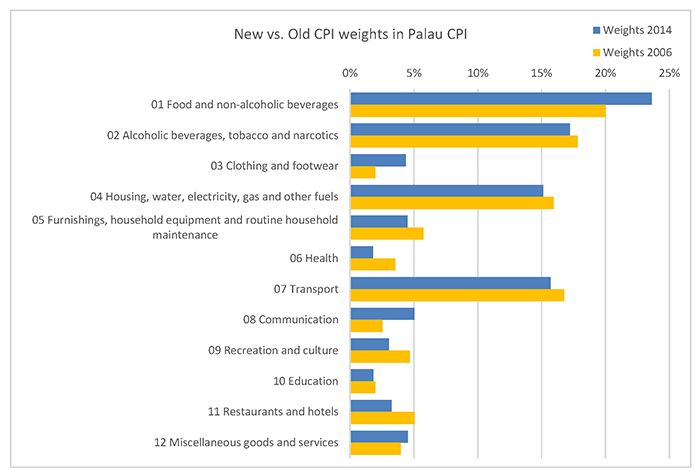 1 The narcotics part of division 02 Alcoholic Beverages, Tobacco and narcotics is used to classify expenditure on betelnut in Palau